Welcome to my own personal corner of Hell.

Last Saturday my wife and I took our daughter down to get here first Games Workshop experience. I figured that it was long past time to get her immersed in the scene. 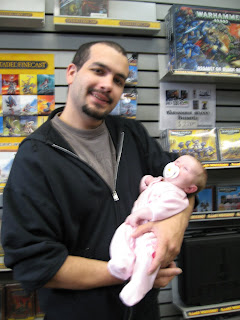 Ok well it was really so that I could get my Eisenhorn Omnibus signed by Dan Abnett. My wife was just kind enough to accompany me down and get a copy of Guardians of the Galaxy hardcover trade 1 signed for a buddy. A thank you gift for presiding at our wedding. Sure it was 2.5 years late but its the thought that counts right lol. 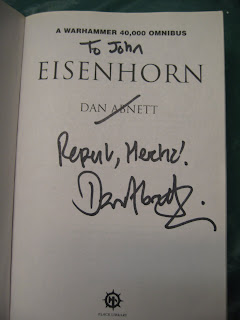 Dan was really down to Earth and willing to answer all our questions. From those Ive garnered a couple of small possible spoilers for your enjoyment. Both concern future works of his.

First up we should expect to see an Imperial Fists stand alone title very shortly. From what I get from this I would say end of the year 1st quarter of 2012 at the latest.

The next order of business concerns our more human interests in the Grim-dark Future. No not the Ghosts, think a bit my secretive. Yeah that's right. The Inquisition. Dan is planing a new trilogy with the first book to be out by this time next year. The setting for this is after the events of Eisenhorn and Ravenor. Making them a trilogy of trilogies.

The twist comes from who the main character will be. The one and only Ms Alizebeth Bequin. Yep that's right, she comes out of her coma, and seems to make her self to be quite the important person to the Ordos.

Yeah ok I know not that big a spoiler but it was good news to me. I am looking forward to this release. I may even break down and buy these ones individually instead of waiting for the Omnibus as I usually do.
Posted by Tordeck at 19:40 3 comments:

The Battle for Salvation Grand Tournament, Round 5, Best Armies

So going into Sunday I knew my 3-1 record would put me somewhere near the top and I was excited to see exactly where. Upon entering the venue I quickly made my way over to the pairings sheets to see what bracket I would be in.

Lo and behold I was in the Silver Bracket, which meant I was not in contention for Tournament Champ but at least I could possible win my bracket and take that award. In my bracket was the 1 Ork player; Ned Merrick w/ Blood Angels, my first round opponent, and who I would face in the finals if we both won rounds 5 +6; a Space Wolves player; a fellow DE guy though he was running an entire Footdar army; a Grey Knights player, who I would face in Round 5; and 2 others I didnt catch. No matter how it broke down I knew this was going to be a long hard fight, but first I had to get past one of the 2 worst match-ups for Dark Eldar, Grey Knights (the other being mech guard.)

When first looking at his list I was surprised by how "soft" it was compared to the 3-6 Dread, Purifier/Henchmen spam I am used to. I was feeling pretty good going into this.

He won the roll and elected to go first. He got 5 on his roll for Grand Master Ability which allowed him to give his Purifiers, Paladins, and Dreadknight the scout USR. He would choose to outflank all 3. He also combat squaded the Strike Squad and the Interceptors and chose to have the Termies Deep Strike.

Deployed his Grand master and combat half of the strike squad as close to the center objective as he could. I then deployed my Hellions and Baron as close as I could to my left quarter's objective and still remain 18 away from his unit. I chose not to try and steal as I knew I would need that all important "clean-up turn."

He walked on one half on the Interceptors with Librarian attached, the Dreadnaught and the shooty half of his Strike Squad on my left side, the other half of the Interceptors would shunt to mid field on this same side. His other remaining Strike Squad walked in on the right side. He took a few pop shoots at the Hellions who took one loss and were then removed from LOS from the rest of his army.

Knowing that he had outflankers, deep strikers and half a unit of Interceptors left to shunt I chose to gun line my army so that where ever he came in I would have targets to shoot at. I tried to use a raider and 10 man unit to shut down his ability to come in on the left flank, this would prove to be disastrous as he got all his reserves on T2 before I could spread out enough. I also tried to get a first turn charge with Vect and this would also fail due to difficult terrain leaving him and the Brides out on the open. I shot and killed a few models here and there but with them being fearless it didnt do much.

On turn 2 and all his reserves on the table I was toast. His Purifiers and Paladins came in on the left flank, the Dreadknight on the right. He would proceed to flame away the Raider and Warriors on that side, as well as blow the Venoms down with the Dreadknight's Cannon. The GW dice finally fully turned on me (after rolling 7 ones in a row over 2 games when it came to saving my Hellions) and I failed every Flickerfield and Cover Save my flyers had. He would go on a hot steak and every penetration roll would result in a wreck or explode result. He would also kill off every Bride, leaving Vect to fend for himself.

Basically this game ended for me on his turn 2. I did get some good shots in. Examples, killing his Grandmaster, 10 Grey Knights and Librarian with Vect before he died to a shot from a Psycannon. Taking 5 wounds off the Dreadknight with a 10 man Warrior unit before he would charge it directly into my Agoniser toting Wych who would kill it off. My Wychs holding up 5 Termies and 10 Grey Knights for 3 turns before fleeing combat.

Now for some pics of the better looking armies I saw over the weekend. 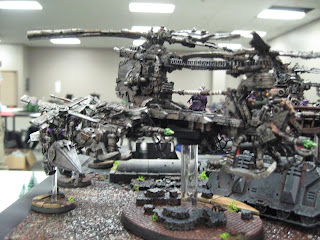 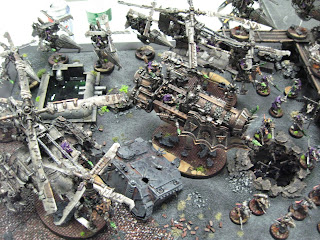 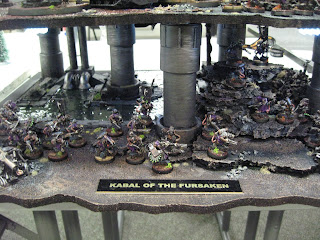 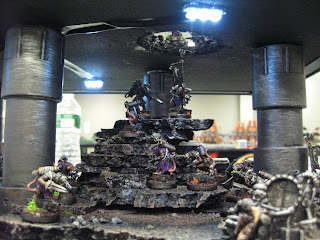 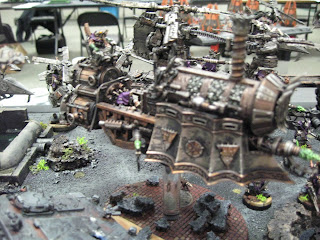 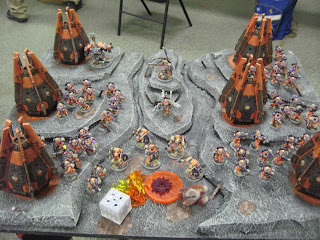 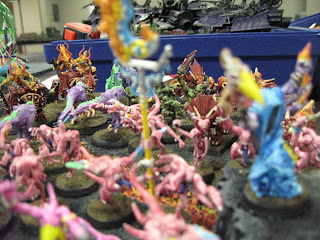 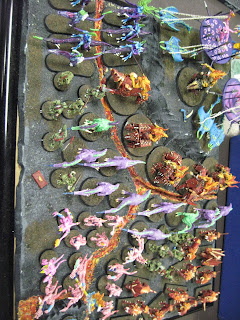 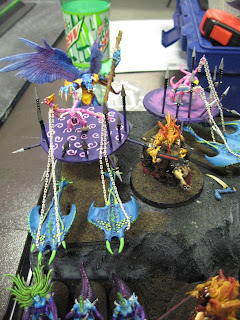 And her boyfriend's RatGuard (they ended up playing each other round 5 lol), looks like Dan wasnt the only one who wanted Skaven in 40k 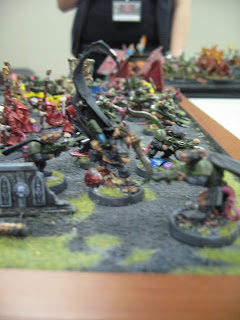 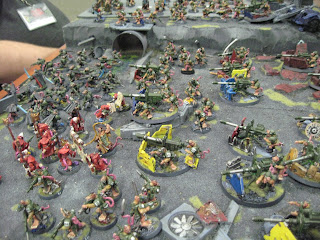 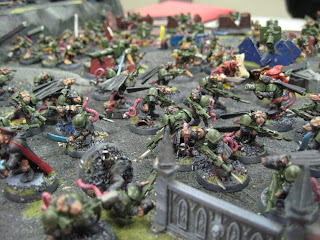 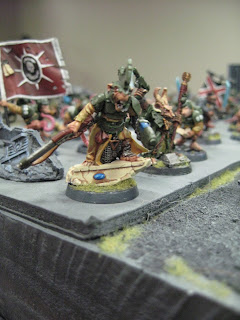 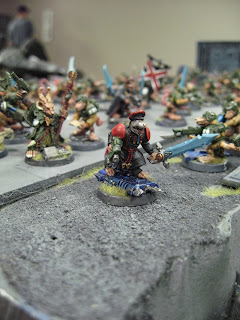 Some an American GI Guard 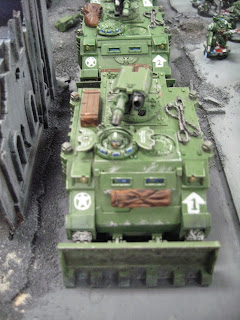 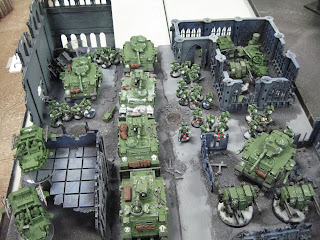 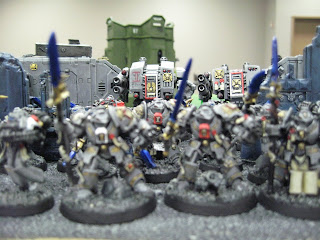 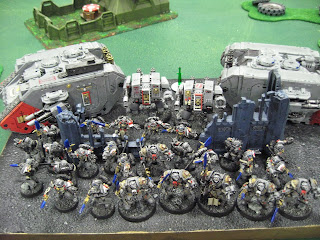 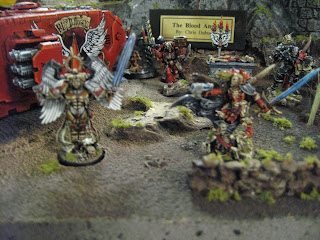 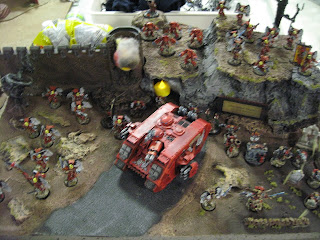 Ned Merrick's Dread which was in contention for Best Painted Single Figure (btw Ned is red-green color blind, which just amazes me that he can paint such a beautiful red army at all) 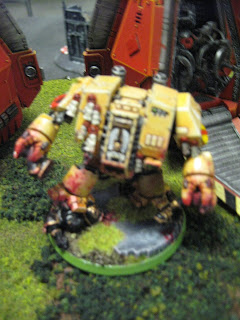 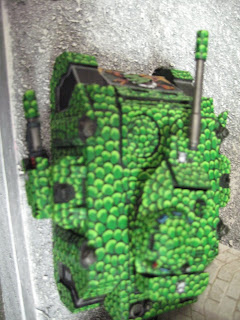 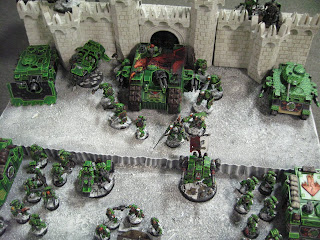 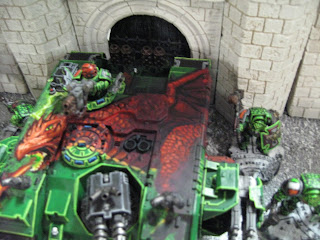 And The Blood Templars 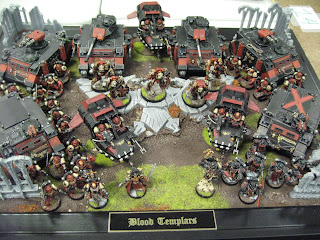 Well thats all the coverage I got from BFS. Now onto Conflict prep.
Posted by Tordeck at 22:08 6 comments:

Sorry for the delay but y'all know how life gets.

Round 3 vs Brad Nichols and his Deathwing
Mission was Seize Ground, Annihilation, Table Quarters - Pitched Battle 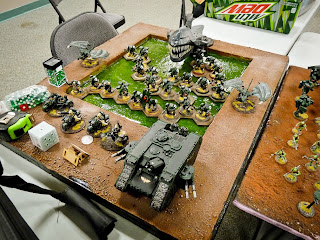 We rolled, I won, gave him first turn. I knew with half his army deep striking that I wanted to be more reactionary in my deployments.

He put one Termi unit in the LR, walked one on, and Deep Striked the rest. He put his LR, and Typhoons all on the right side of the board (from my perspective). His walking unit came in on the left flank.

I set up my Hellions opposite hiding in a building to hold that objective, with both Venoms and a Warrior Raider, and two Ravs. I gun-lined the rest with Vect and the brides all the way to the left flank and Wychs in center.

His turn one he droops in a squad to support the rest of his army and Belial's squad on my left flank to support the walking unit and try keep me from moving towards those objectives (or so he thought) His Typhoons fired but didn't do much.

Thanks to where he placed Belial I was able to move my Raider up, disembark, run and assault 1st turn with Vect's unit. This combat would last the rest of the game, with him throwing the walking unit and the last Deep Strike unit into the fray. By the end of the game I had 1 Shardnet Wych left alive holding off the last 2 TH/SS Terminators. Vect killed Beliel and a whole load of Termies but finally fell to a Thunderhammer.

I wrecked the raider and a typhoon on turn 1, And ended up locking those two units of Termies up with the Wychs. With most of his army tied up I was able to move out with my raider squads and hellions to grab 4 out of the 5 objectives. A solid victory for me. By this point I am in love with Vect and Shardnet Brides.

Well I was happy, right until I saw the pairings for round 4. Yep, thats right, I got matched up versus my fellow Ordo Malleus club member and car pool buddy Matt. To make matters worse he and I played a practice game (using the same scenario) the week before and he tabled me. So I was not looking forward to this round what so ever.

Round 4 vs Matt Wallach of Ordo Malleus and his Space Wolves
Mission was Table Quarters, Seize Ground, Annihilation - Spearhead 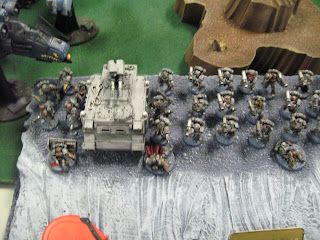 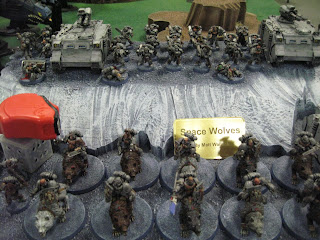 We rolled, I won again but let him go first (I planned to try and Seize)

He castled up around a building with all his long fangs inside it and the Rhino with Rune Priest behind. The LasBacks were along his table edge and the Cav were out in front to lead out.

I put the hellions in my building (yet again). Put my Ravs are forward as I could. With the Wychs and 1 warrior raider along the center line. the rest were along my table edge.

I attempted to seize and this is were the game ended for Matt. I was successful in my attempt. I moved my Raiders from center-line into that quarter, while moving the Venoms to get LOS on his cav. The other warrior raiders boosted to that quarter. While Vect's moved up 12 so I could disembark, run, and assault a thundercav unit on T1 I now had three quarters and he was trapped in his own deployment zone.

I used the Ravs and Raiders to stop his LasBacks from doing anything and lit up one of the thundercav with Venoms, killing them all. I then charged the Lord's unit with Vect. That combat lasted till his turn and I was able to get the last cav unit on my turn. Meanwhile I finished off the LasBacks and Rhino and their contents. My Venoms died to Long Fangs but their warriors were able to move to grab the center objective and the right quarter and its objective.

Remaining round and pics of the best armies will be posted up Tuesday or so. Plus Look for some spoilers from my recent trip to GW 8th street for Dan Abnett's book signing to come within the week.
Posted by Tordeck at 20:19 5 comments: